Art of the Church 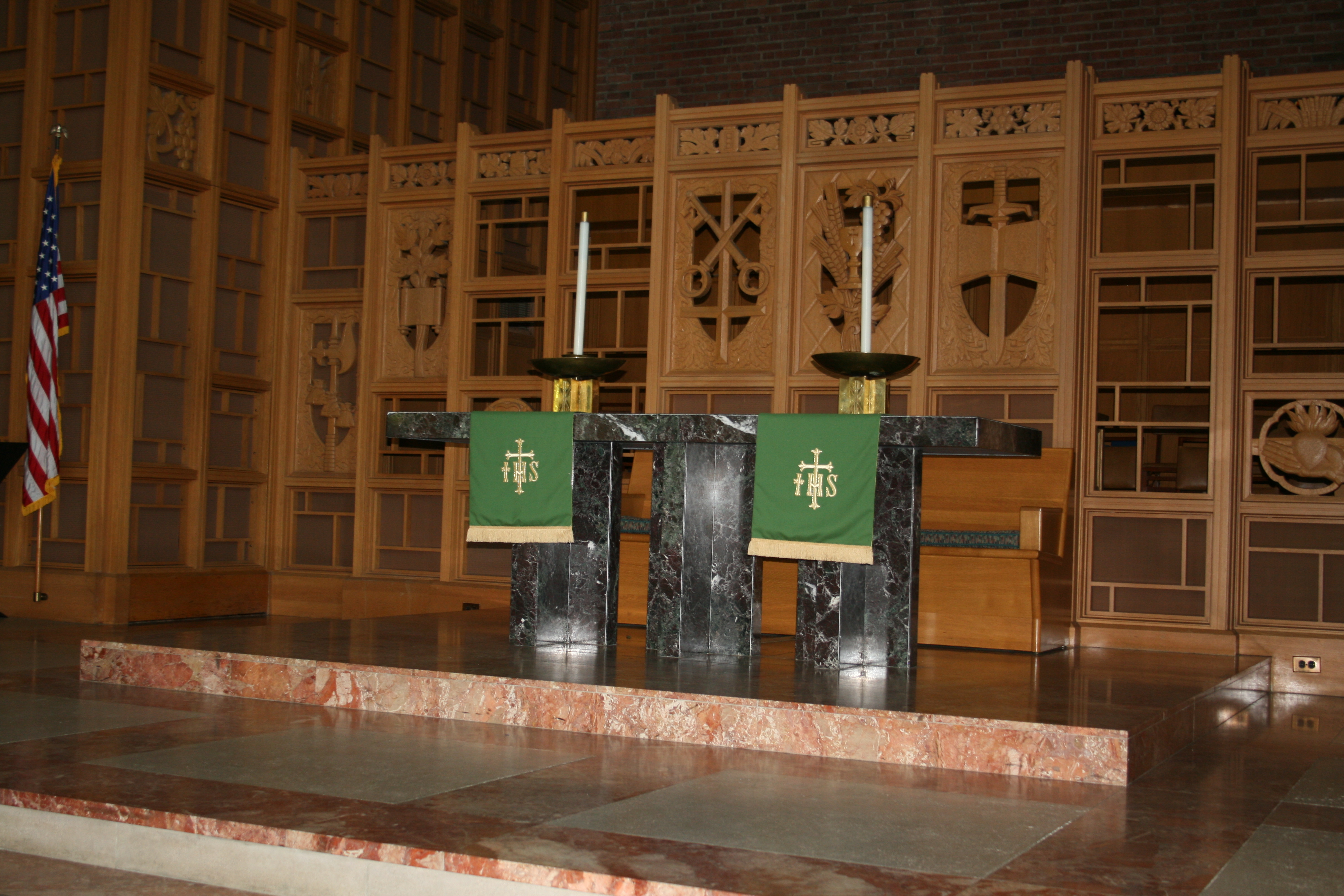 A study of church history reveals that the use of symbolism as an asset to Christian worship has experienced changes.  In the early history of Christianity, symbols were used freely and were particularly helpful to worshippers who could not read.  During periods of persecution they were employed as a secret language.  The best examples of these, perhaps, were in the catacombs.  During certain periods of reform much of this type of Christian art was destroyed, but in more recent times there has been a complete reversal.  Today, many churches are adding enriched forms of art that symbolize doctrines, practices, and events of the Christian heritage.

Both the Old and New Testament are rich in symbolic phrases and words.  Just as we salute the stars and stripes of our country's flag as an expression of our loyalty, so should the cross, the crown and the other art forms prompt us to give expression to the loyalty and devotion we feel for our Church.  The more meaningful the symbols are, the more sincere is our reverence for the Christian acts and events symbolized.

THE SHIP represents the church, bearing through violent storms men of many places, who desire to inhabit the city of the good kingdom.  The main part of the ship is called the nave and comes from navis, meaning ship.  The modified Patee Cross, the staff that supports the sails of the ship, is representative of Him who is the church's support and guide as it sails the seas of life.  Appropriately, the ship appears on the pulpit.

THE SEAL OF MARTIN LUTHER used on our altar wall was used on the altar in one of the first Protestant churches in Geneva, Switzerland.  The ring on the outer edge denotes "no beginning and no end." The white rose is symbolic of purity.  The cross centered in the heart recalls His love and passion for the church.

THE BURNING HEART which appears behind the altar on the same side as the pulpit characterizes John Calvin, whose principles are embodied in the creeds of the Presbyterian and Reformed Protestant churches.  Note the hand offering the burring heart; John Calvin said, "My heart I give the Lord eagerly and sincerely." 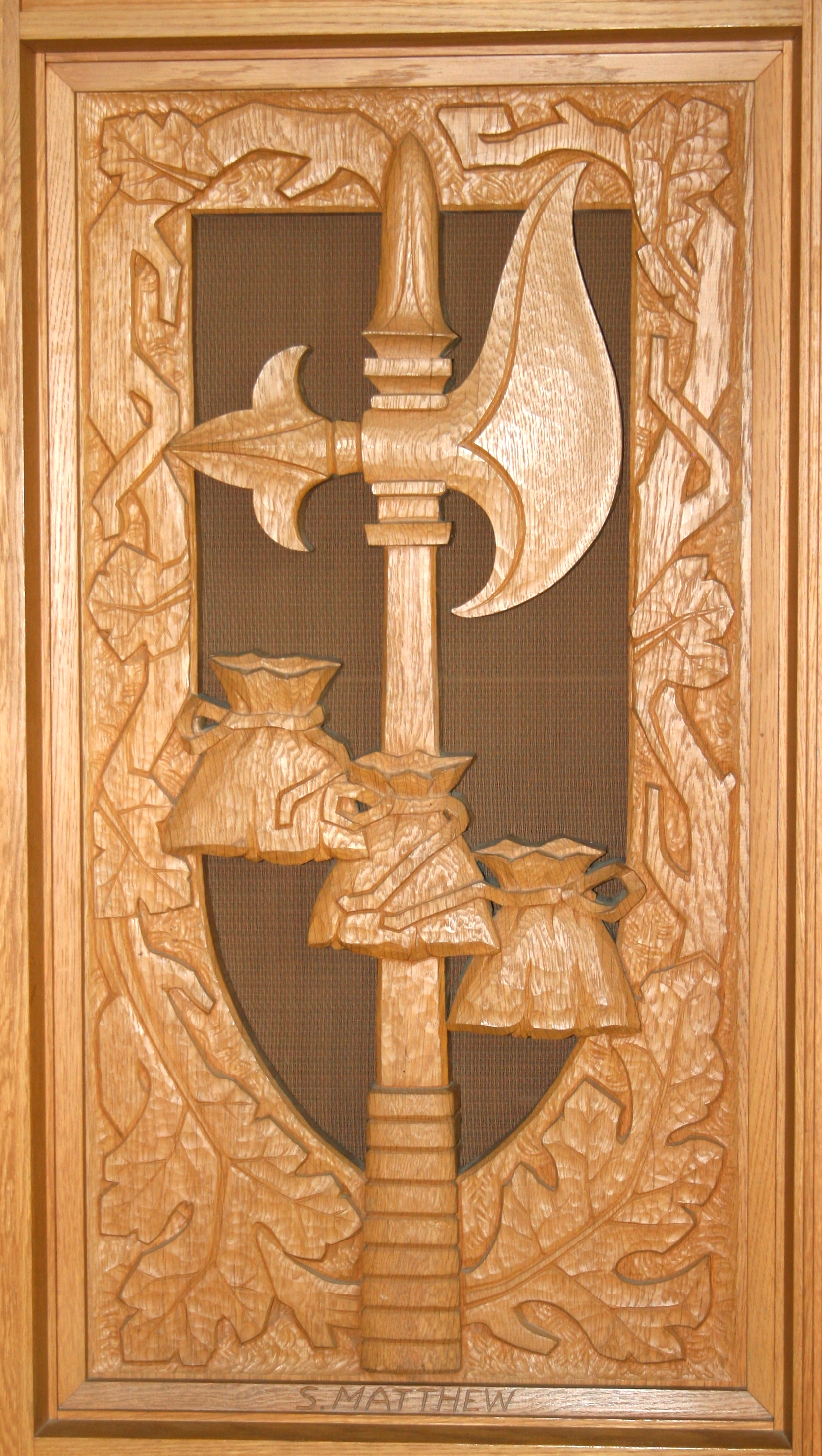 ST. MATTHEW as an Evangelist (writer of one of the four gospels) is symbolized by three purses to indicate his occupation as a tax gatherer prior to his call to apostleship. (The battle axe is used as with other apostles to indicate martyrdom.) 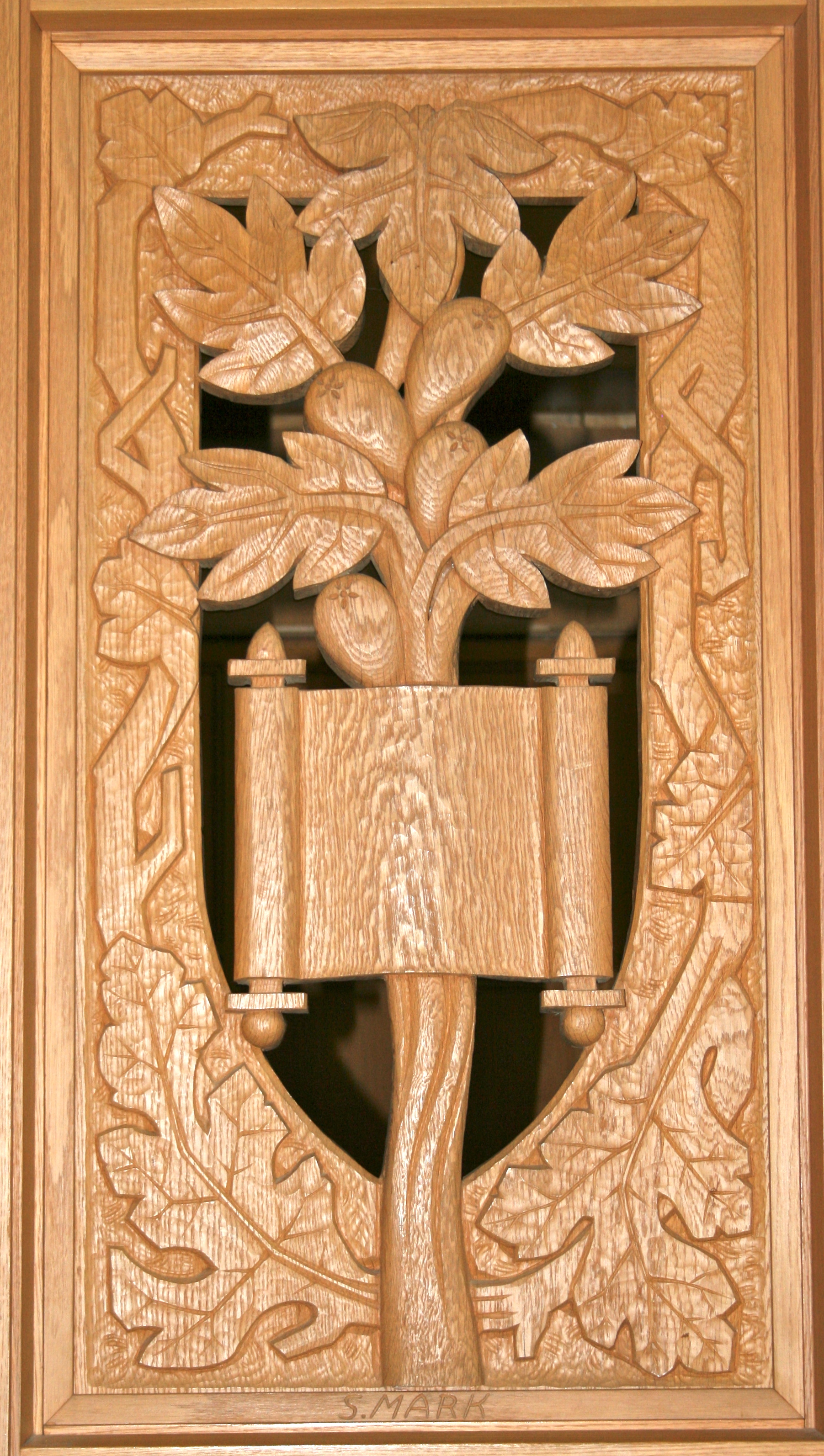 ST. MARK, the writer of the second gospel, can be thought of in connection with the scroll, which commonly stands for the Holy Scriptures.  This emblem, used with the branch bearing figs, suggests this Evangelist's fruitfulness and fidelity both as a writer and as a man of missionary spirit as he accompanied St. Paul. 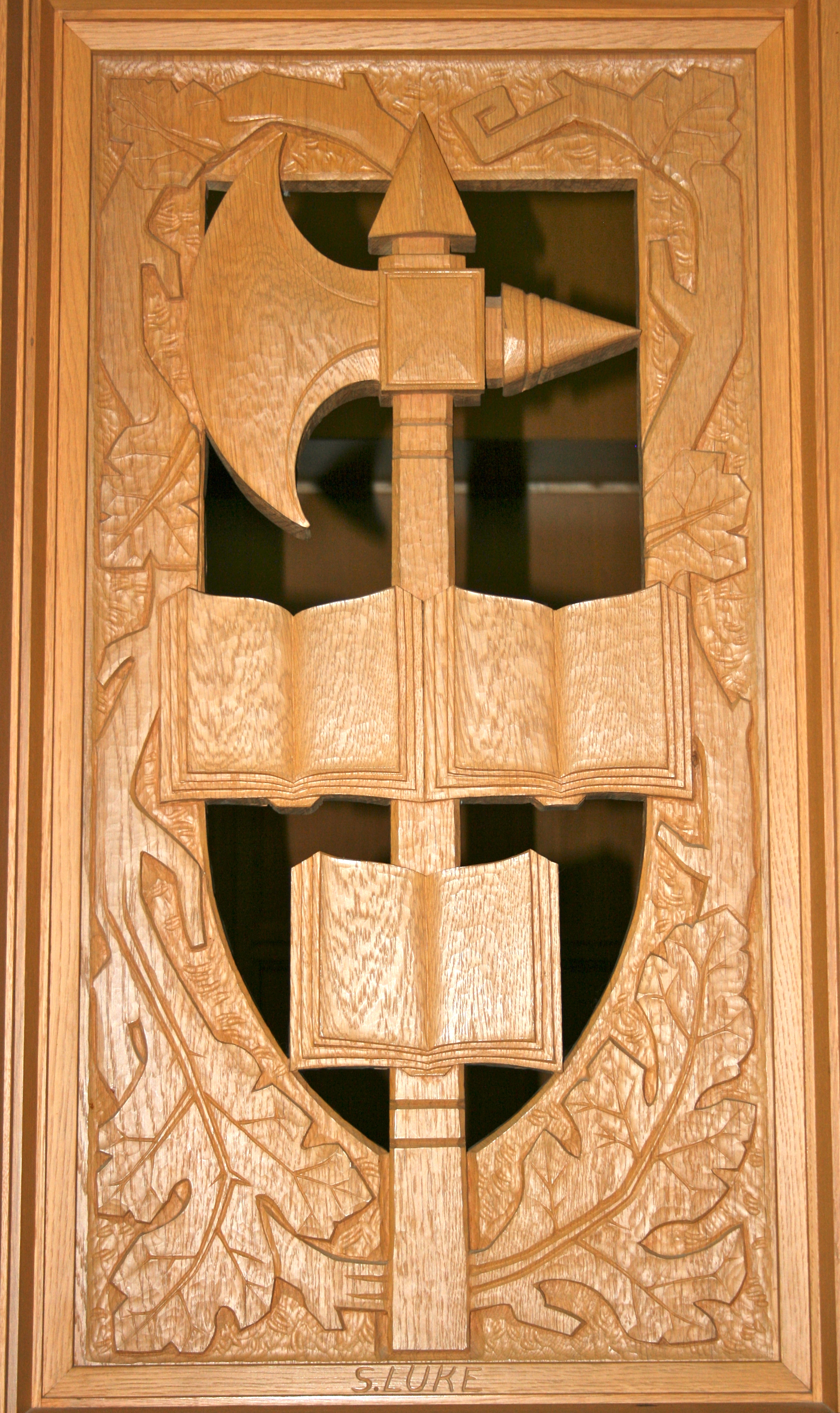 ST. LUKE - The three open books may well signify the most learned of the Evangelists, St. Luke.  He was a physician and was the author of the third gospel as well as the Book of Acts.  The battle axe reminds us that he, too, because of his faith, suffered death by martyrdom. 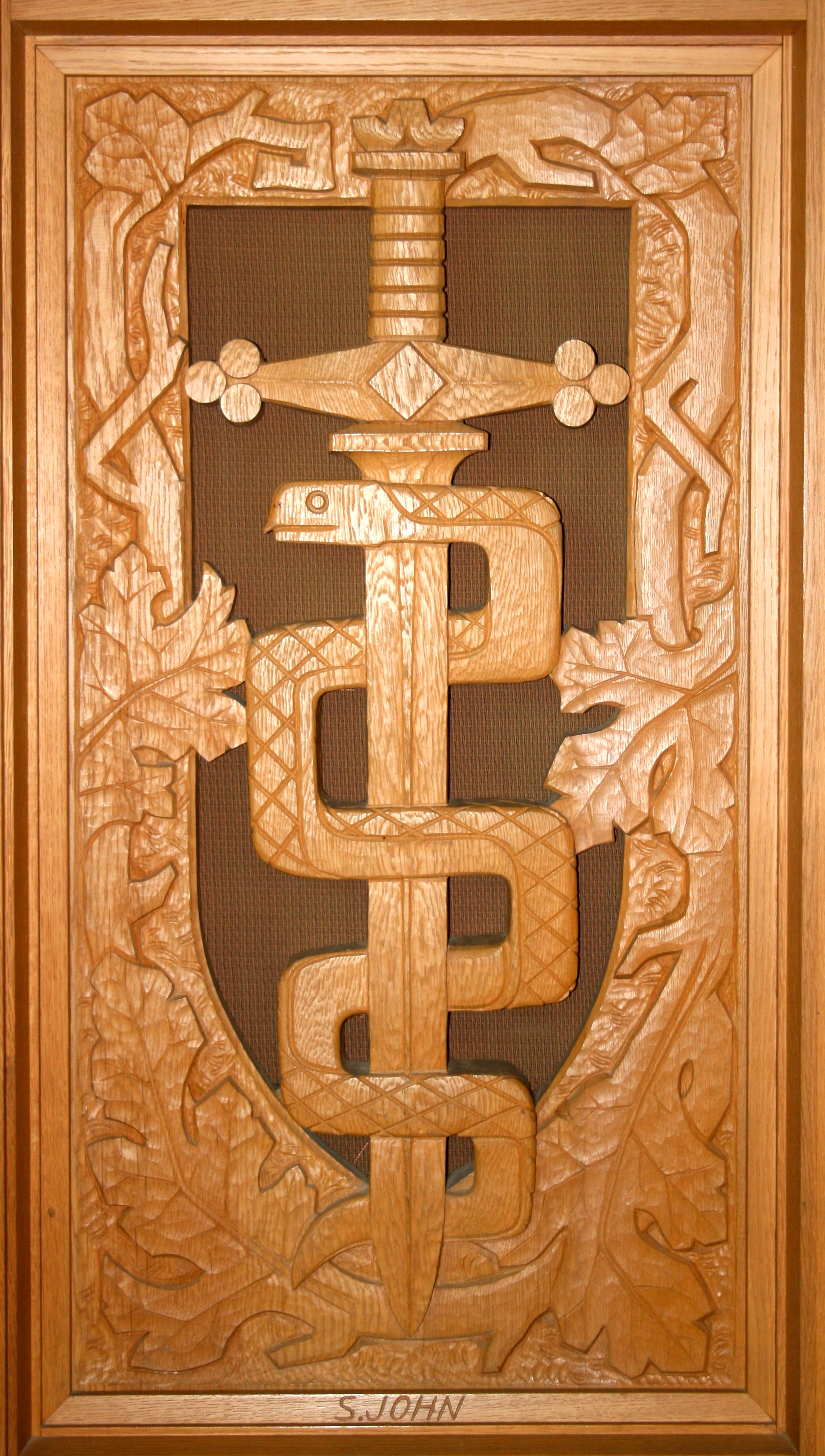 ST. JOHN as an apostle is represented often by a serpent emerging from a chalice to indicate an attempt made to poison him.  The serpent entwined about a sword indicates justice, power, and authority.  The serpent refers to the wisdom and power of John. 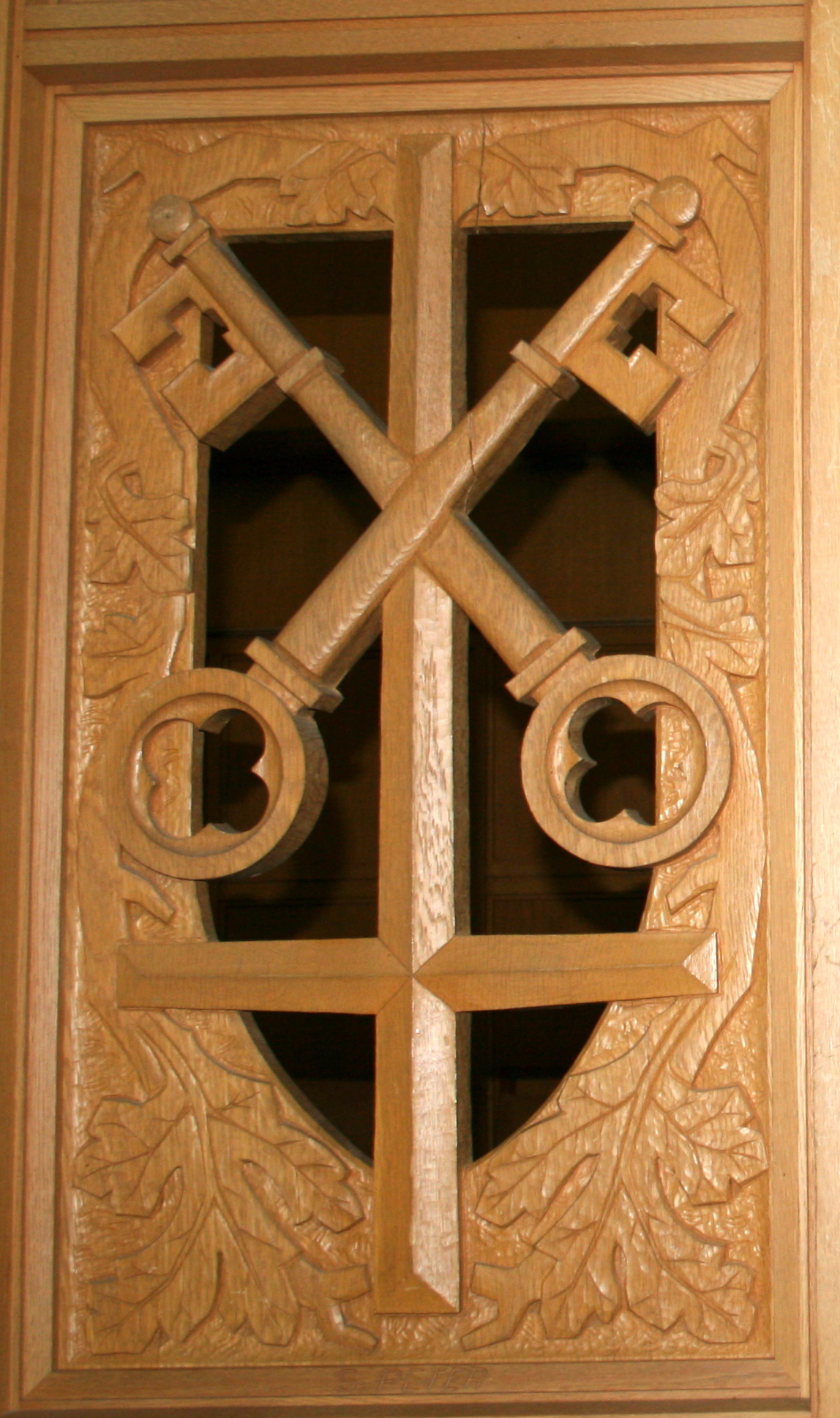 ST. PETER represented by crossed keys forming the Saltine Cross, confessed his faith and had great power given unto him as keeper of the "keys of the kingdom." The inverted cross marks a beautiful gesture of humility, for at his own request Peter was crucified head downward because he did not deem himself worthy of dying in the manner of the Lord. 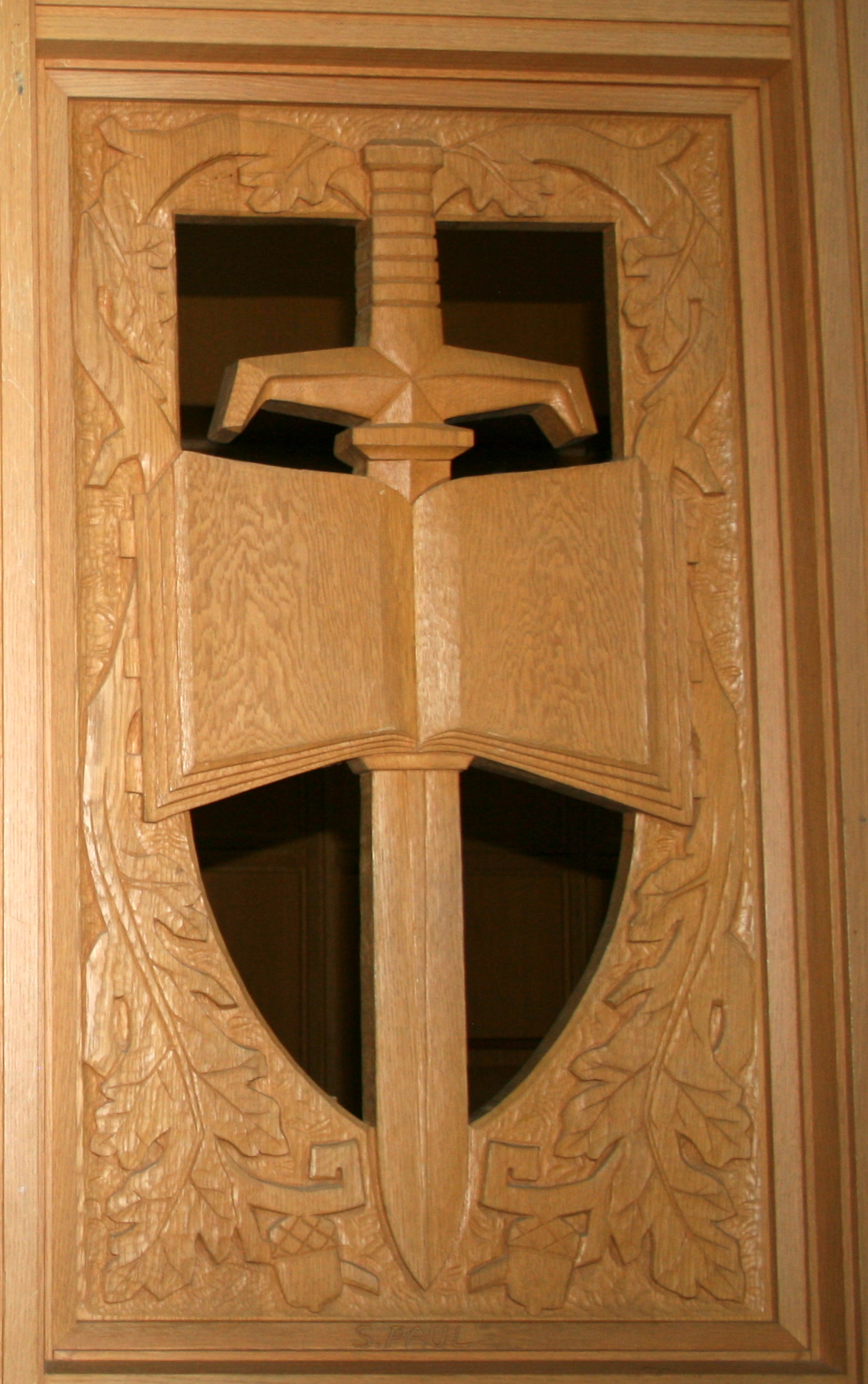 ST. PAUL is denoted by the open Bible, the Word of God.  Behind the Bible is a cross-hilted sword.  Paul spoke of the word of God as the "sword of the spirit."

ST. THOMAS was a man of doubt, but was finally able to proclaim with conviction his faith in the Master - "My Lord and my God." This apostle is believed to have reached India, where he erected a church building with his own labor.  He is often considered the patron saint of builders.  The mark of his trade is the carpenter's square and a vertical spear.

ST. SIMON was the companion of St. Jude on his many missionary journeys.  Often a fish or a shield is used to indicate that he was a "fisher of men."  Because tradition has passed on the belief that he suffered martyrdom in Persia by a saw, this emblem is most often used to represent him.

ST. ANDREW can be represented by several forms, the most common of which is shown here.  Two fish crossed recall his original occupation and his call to become a "fisher of men."

JAMES THE GREAT, who travelled widely, is symbolized by three scalloped shells.  This apostle was known for his zeal, courage, and missionary spirit.

THE DOVE - The most authentic representation of the Holy Spirit is the dove.  When employed with Nimbus (Latin for cloud or circle) surrounding the head, the dove signifies sanctity.  Three of the Gospels - Matthew, Luke and John - refer to the Holy Spirit descending "like a dove."

HOLY MATRIMONY - The circle has no beginning or end and betokens eternity or complete union.  The two circles based at the cross indicate a dedicated union, signifying Holy Matrimony.

THE LILY normally means for us the Easter Lily.  It signifies the Resurrection, for the bulb decaying in the earth only to produce a plant that flowers anew, symbolizes the promise of immortality.  The use of the Madonna Lily stands for the virginity of Mary, symbolizing her purity and innocence and having a special meaning in connection with the Annunciation.  The scriptures also speak gracefully of the lily in this wise, "consider the lilies of the field - Solomon in all his glory was not arrayed like one of these." - Matthew 6:29

THE HARP- The representation of music usually takes the form of either the harp or the lyre indicating praise or worship as commanded in Psalm 33:2 "Praise the Lord with harp."

GRAPES in a cluster often connote church unity, of which He spoke in John 15:5. "I am the Vine, you are the branches." When combined with sheaves of wheat they are symbolic of Holy Communion, and signify the wine which, has now come to memorialize the blood shed by Christ for man's sins.

THE FIG is normally associated with the first fruit of life.  It also implies fidelity, a virtue prized in Christian teaching. 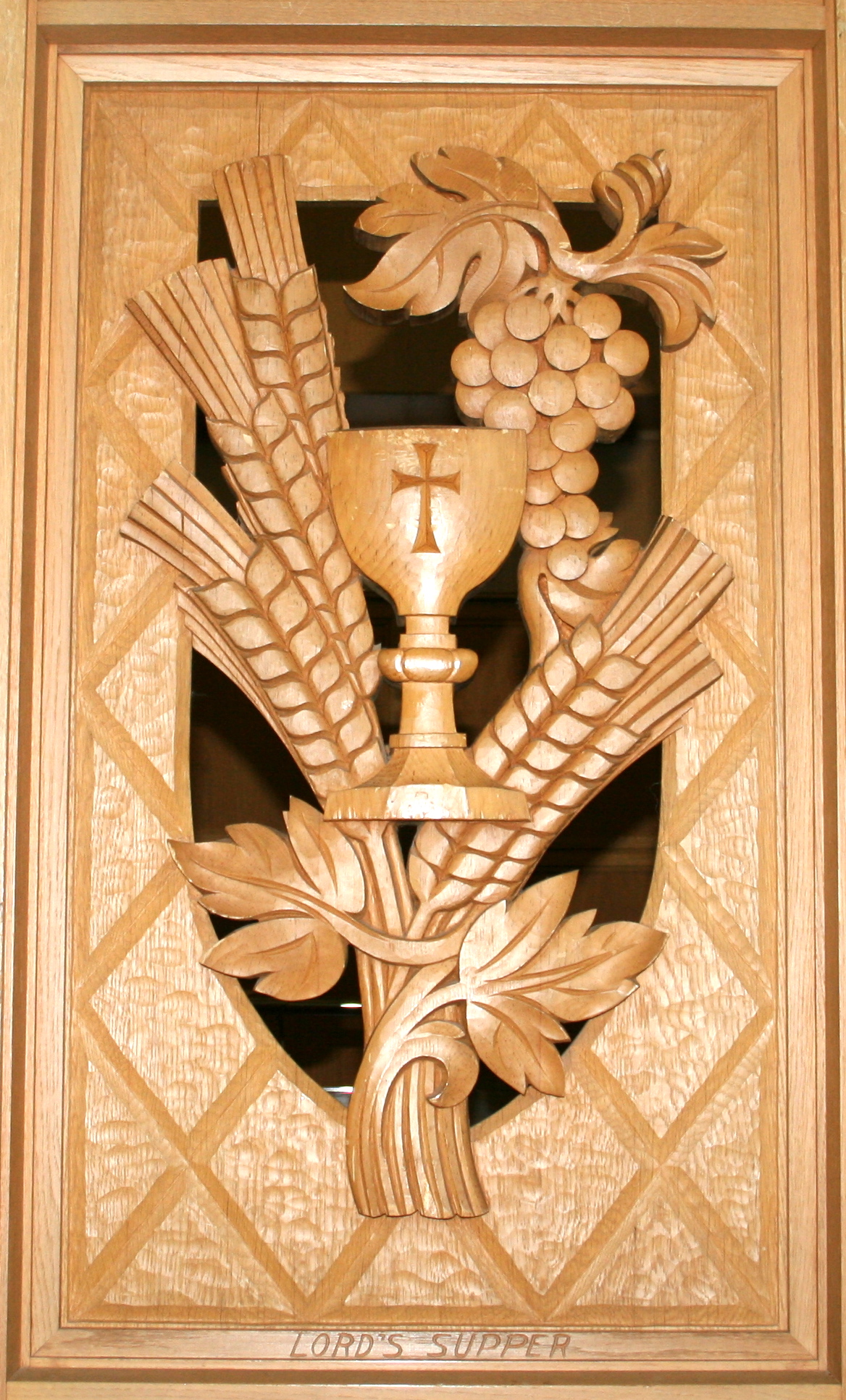 LORD'S SUPPER - Inspiring us as we face the altar are symbols of the Lord's Supper, one of the chief sacraments of Christianity.  The wheat represents bread, symbolic of Christ's broken body; the grapes signify the wine, the blood shed for redemption; the chalice is the common cup used in Communion.